18 °C
View An Internship in the United States & Things to Do in Ukraine & Attractions in Luhansk Region, Ukraine & My Impressions of Germany & My Odessa Impressions & Austria in My Heart on Vic_IV's travel map. 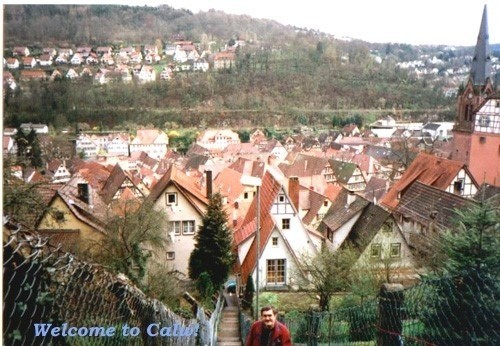 The hills of Calw

"Country Study Through Your Experience" - it was the name of our professional development seminar in Calw. We, a group Ukrainian educators consisting of twenty-two ladies, German teachers from different Ukrainian cities, and I, were privileged to attend that seminar in April-May 2001 on the invitation of the Ministry of Education and Cults of Baden-Württemberg. It was an "all inclusive" trip fully sponsored by the German Government. Thanks a lot, dear Education Ministry! It was very kind of you! 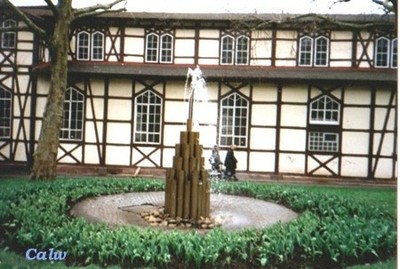 We studied German language and culture at the Teachers’ Academy of Baden-Württemberg and stayed at the teachers’ dormitory downtown. Our seminar was three weeks long, which was great! In addition, we visited the rural life museum in one of the city districts and learnt about the life that farmers led two hundred years ago. One day we had another treat from the Education Ministry: a guided tour of the Black Forest. We visited several Black Forest towns on our way and had very good impressions, in spite of the weather. 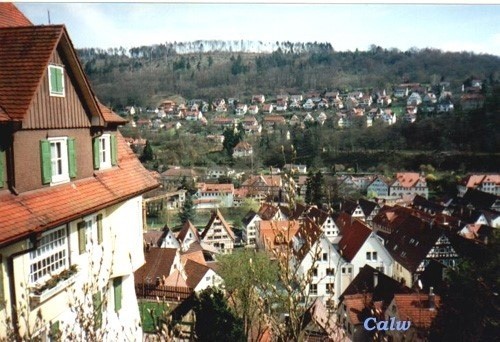 A view of Calw from the hill

It was, in fact, my second visit to Calw. I was there for the first time in December 1999 during my short visit to a friend of mine, who lives in Egenhausen, Calw County. He went shopping to Calw and I joined him there. 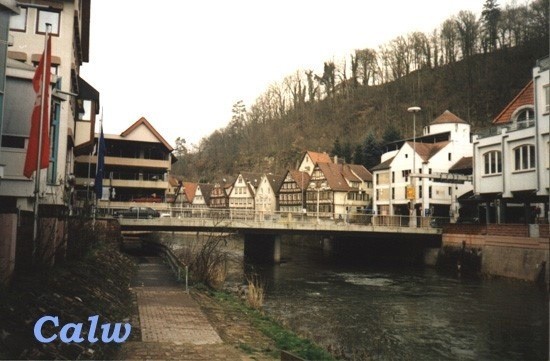 At the river embankment

The city landscape is very special. Calw lies on the River Nagold the hills of the Black Forest on different altitudes, which makes its landscape very special. The city is very tidy, well preserved and nice. I would say you could feel the harmony of its present and the past. 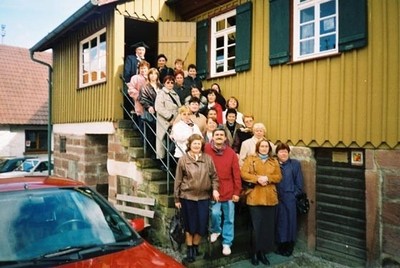 At the Local Lore Museum

Market Square is where you will find the famous Herman Hesse Museum (Marktplatz 30, 75365 Calw). It is near the church. You can also view a lot of medieval half-timbered houses, drop in at a number of small shops, have some coffee at a café, take a stroll to the river embankment. We stayed round the corner from all these places and went for a walk practically every day. 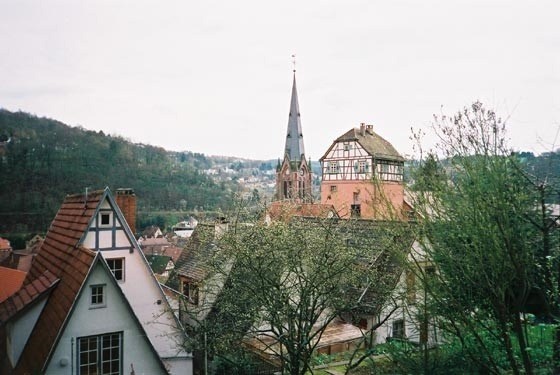 Der Lange and the Church

Der Lange - the Tall One - this is how the name of this tower would sound in English. My window in the teachers’ dormitory faced this tower and I could hear chimes of the church every day. They began at about 5 a.m., like in medieval times. I could get used to them quickly though. This old tower's address is Im Zwinger 20. It was described in 1518 as a watchtower, thieves' tower, Malefiztower (derived from the Latin 'maleficere' = to do something bad), or ”criminals' tower”. The bottom part, a stone construction, housed three prisons, situated over each other. The top floor, a half-timbered construction, was the home of one of the two guards. The “thieves”, or criminals, were punished for their wrong doing and had to endure the loud chimes of the neighboring church every day. 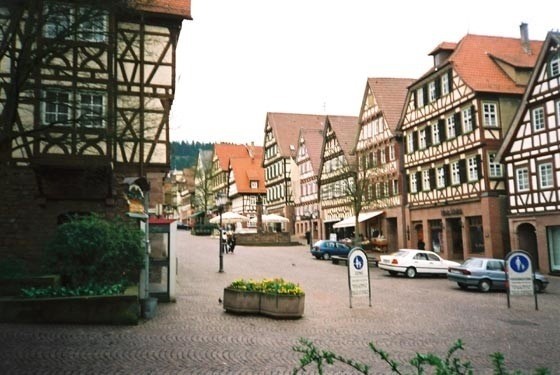 The coat-of-arms was granted on July 11, 1961 and after the district reform again on December 10, 1973. The arms are based on the arms of the city of Calw, with the addition of a fountain in the lower part. The three mountain tops represent the three former Württemberg districts of Calw, Nagold and Neuenburg which were combined to the district Calw in 1938. The fountain represents the many spas and springs in the district. Until 1934 the (smaller) district of Calw used a seal with a natural lion on a mountain top. (From Ralf Hartemink's “International Civic Arms”). 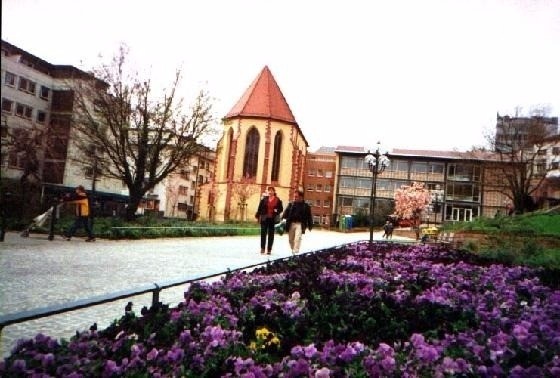 During my stay in Germany as a German teacher at a country study seminar my colleagues and I made a day's trip to Pforzheim to get know this city a little. The city is known as the Gateway to the Black Forest. It stands on the confluence of three rivers: the Enz, the Nagold and the Kleiner Wurm.

It was the Romans who first appreciated the favorable location of the city, settled there and gave the settlement the name of Portus - "gateway". 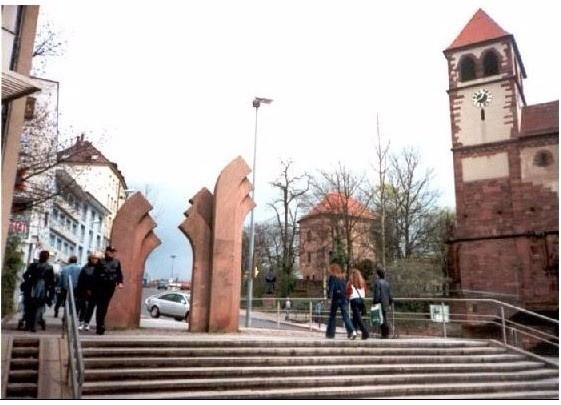 For the first time in Pforzheim

The city is also the birthplace of the great humanist Johannes Reuchlin. The town's long history can only be observed in the ancient castle and the monastery church of St.Michael dating back to the 13th century and a few other remnants. 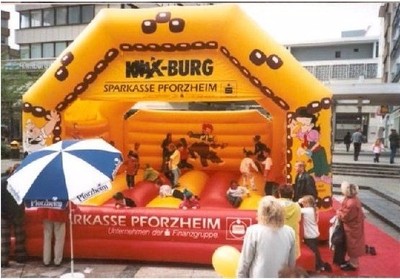 It was interesting to walk downtown and to visit the city museum of gold. The Jewellery Museum in Reuchlin House (Leopoldplatz) includes items of jewellery from the past and samples of the products of the local gold industry.

If you can allow some time for a guided tour of the city, take Minicar-Tour Pforzheim in autumn-winter season and enjoy nice views of the city with an interesting narration ($25 an hour).

In addition, you can attend a great concert in Kupferdächle. All concerts and shows begin at 8.30 p.m. Enjoy the culture stage (evenings); culture breakfast (Sundays,11 a.m.); open stage (every month, last Thursday). Directions: 31 Kallhardtstrasse. hope to make another trip to that city in the future.

Posted by Vic_IV 03:26 Archived in Germany

Previous Next Table of contents

This blog requires you to be a logged in member of Travellerspoint to place comments.

If you aren't a member of Travellerspoint yet, you can join for free.